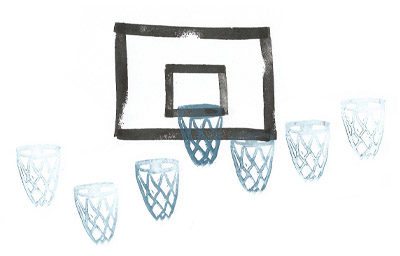 An easy search on the net is enough to find thousands of sources making reference to how bookmakers do to earn money, regardless of the outcomes in sports events. They do that in many different ways, but the most basic is simple to understand: they charge a kind of commission that it’s already included on the odds they offer you to win.

To understand this, the first you have to know is that you can turn the odds that the bookmakers offer into a probability. For example, if we have a decimal format odds, just have to divide 1 by the figure, and multiply per 100. So, if bookmakers offer 1.7 euros for each euro we bet on the win of FC Barcelona, somehow we are accepting that the chances of a Barcelona win are 1/1.7×100, so 58.8%. Let’s find some real example, December 19th, 11:30 PM, for the Philadelphia 76ers against Brooklyn Nets game, Bwin offers 1.85 for the 76ers win, and 1.97 for the Nets victory. According to what I said, that means 54% probability of 76ers to win, and 50.7% probability of a Nets victory. Or Philadelphia wins or Brooklyn do so, so the add of this two figures should be 100%, and the fact is that it is 104.7%. The bookmakers overestimate on purpose the odds of victory of each team, to make sure that whoever wins, there is money left for them to earn, a kind of commission. We can repeat as much as we want this figure, and almost everytime we’d get a plus 100% result. Up to this point, nothing much new. This is not the only practice that ensures money for the bookmakers, that wouldn’t be enough, but in this we’ll focus on that.

If you waste some time doing the same exercise for many different games, you’ll figure out that more or less the commission charged is quite the same in most of the matches. That could drive you to think that whoever you bet for, you’re gonna be charged more or less the same. Is it true? By now we’ve figured out how the bookmakers charge us for betting on a specific game but, are we able to know which is the commission for betting on a specific team?

To figure it out I’ve made a frequency distribution with the odds offered by the bookmakers. The analysis is based on each game on the Major League Baseball between 2005 and 2012, also 2016. That makes a sum of more than 22.000 games. Chose the baseball for two basic reasons: a huge number of games on a simple season, no chance of, what makes the exercise easier to do and understand. The source of the data between 2005 and 2012 is website and got 2016 data from Oddsportal. In both cases, the figures represent an average of the odds offered by the main bookmakers just before the game starts.

The exercise lies in passing over every simple bet, making groups of them, putting together the ones which represent a probability between 2% and 5%, another group with the ones between 5% and 8%, and so on. Once this is done, I’ve checked for every group how many of the  were at the end winning ones, and how many were not. If there is an enough amount of bets in a specific group and the estimation of probability is correct, the number of winning bets should be in between the interval. The figure below shows the difference between the estimation and the reality. So, if for the group of bets between 47% and 50% the real number of bets won is 46.5%, on the figure you would see -2%, which is the difference between 46.5% and the center of this interval: 48.5%. The line is a 3-value moving average.

As expected, on every group the number of winning bets is smaller than estimated for the bookmakers market, what confirms that de bookmakers overestimate the real chance of win. Besides, there is something of what I was after in this figure: we don’t pay the same commission betting for favorites than doing it for underdogs. The difference reaches a point in which betting for a team with a chance of win between 65% and 68% on the Major League Baseball it’s been charging by average with a 2,7% commission, whereas betting for teams with chance between 35% and 38% you’d have played for free, even you’d been paid 0.5%. Even if I wouldn’t know who the hell is Clayton Kershaw, betting blindfolded in every team within between this interval would have won some money.

About the reasons, nothing on this figure allows to take conclusions, but I do have a theory. This interval between 35% and 38% is the maybe psychologically the worst for betting. I mean, betting for favorite always seems safer, and in any case, if you’re are willing to bet for and underdog, make sense that you look for one which gives you enough money to worth the risk. Makes sense that betting for this kind of is unattractive, and so the bookmakers reduce here the commission to stimulate betting for this kind of teams. Anyway, it seems we have an answer for the question if, in a long-term thinking, is it better to bet on favorites or underdogs.

Let’s go beyond, is this pattern unique to baseball? I made the exercise also for the NBA, another league that accomplish our basic specifications, though has the half number of games per season. The figure shows such a similar shape, again we have a ‘peak’, between 35% and 40% the commission goes almost non-existent, from then tends to rise.

There’s an important difference between the two sports, while on baseball the frequency distribution is narrow, in the NBA there are many more games with an obvious favorite. One of the reasons for this is the importance of a starting pitcher in baseball. The player on this role a critical part on the final score of the match, and to avoid fatigue and injuries 4 or 5 players rotate on this position. So the best pitcher in the team usually plays only one of every five games, make easier for worst teams in the league to beat the best ones. That’s one of the reasons of a narrow frequency distribution on baseball.